Which IDE should a frontend-developer choose: vs code, Webstorm or Sublime text 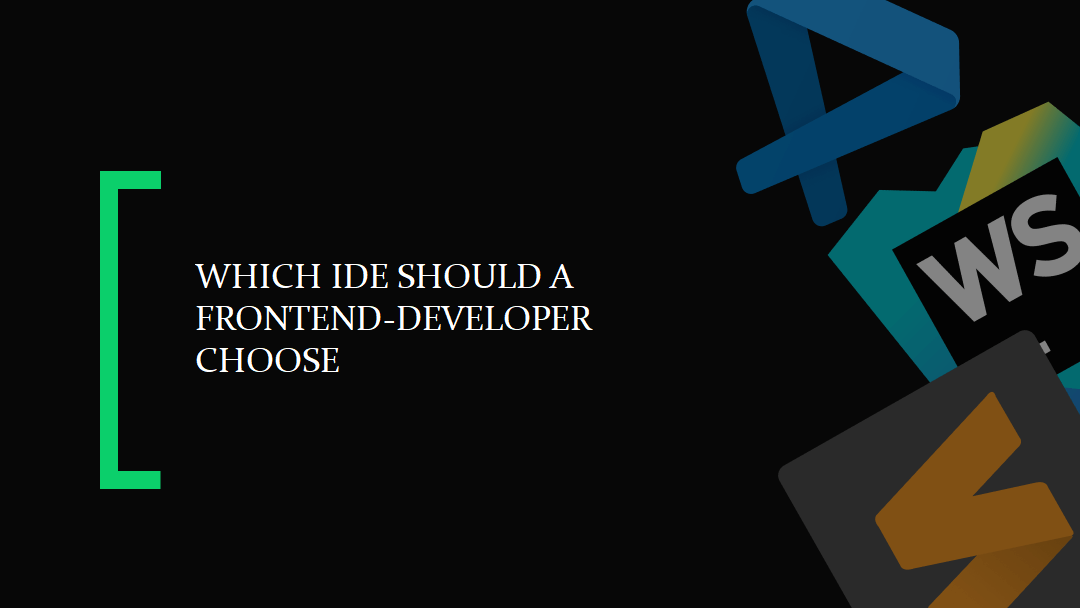 IDE (Integrated Development Environment) is an integrated, unified development environment that is used by developers to create various software.

There are many IDEs that have been on the market for a long time and have gathered their audience. Also, in addition to universal development environments, there are various specific editors for a specific technology (for example, HeidiSQL or phpMyAdmin for databases).

Therefore, novice developers face the question: which editor to choose? In this part, we will talk about the editors used by our frontend developers.

This article will complete a series of articles regarding IDEs.

VS Code is a code editor with the necessary features for developing web applications. The IDE is developed and maintained by Microsoft and is very popular among web developers due to its simplicity, functionality expansion and customization.

The main factors that influenced my choice:

Some editor functions are configured only through changing text configs, and not through the interface. It can be slow due to the large number of plugins so remove the ones you don’t use. Sometimes there are problems when working with large files.

Considered WebStorm as an alternative. This editor has more advanced code analysis, refactoring, and debugging capabilities and is suitable for developing with more complex environments.

That’s what will come in handy in development:

I use VS Code at work. This IDE is becoming more and more popular; the community is growing, and it gives good technical support – program development and the emergence of new useful plugins. When choosing an IDE, most of all I paid attention to ease of use, the possibility of expanding functionality and the overall feeling of working.

VS Code can be easily and quickly installed on any OS due to its compactness and lightness. And it also has a convenient and visual file tree.

Not all the functionality that is needed for frontend development comes “out of the box”, for example, the code formatting function. This makes it difficult for novice developers as the IDE needs to be configured manually.

For frontend development, the main choices are Atom, Sublime Text, Brackets, and VS Code. Each has strengths and weaknesses, but in general the differences are not so critical.

Sublime Text works best with large amounts of text, unlike, for example, Atom, where large files can take more than 10-20 seconds to load and lag brutally when viewed. In all other editors, including VS Code, files are processed quite quickly.

In my work I use WebStorm from JetBrains. At first, the interface seemed rather complicated, but I quickly got used to it. Due to its functionality, the IDE covers most of the needs in the development of simple and fairly large projects.

When choosing an IDE, the following parameters were important for me:

A couple of WebStorm features:

Of the shortcomings, I would note that the environment noticeably freezes if, in addition to the IDE, some other heavy programs are running on the computer.

For simple tasks, I periodically return to the Atom text editor – suitable for small projects without assemblers and any additional development tools. It is suitable for beginners, while I would recommend WebStorm for more experienced developers.

I didn’t install additional plugins. Personally, the basic functionality of WebStorm suits me more than a little.

On this site you can get acquainted with the IDE itself. And I recommend learning hotkeys.

I work in Sublime Text – it’s pretty fast, easy to customize, I like it visually, and it suits my tasks (layout and writing JS-code). When choosing an editor, I paid attention to what options it has for customization, how convenient it is to work and whether it is possible to install plugins.

The main disadvantage is that not everything comes “out of the box”, so you have to install a lot of plugins before start using it (for example, AutoFileName, ColorHighliter, Emmet and TerminalView).

The best alternative is VS Code. It is more functional and everything you need comes out of the box. But my sense of beauty suffers when I use it. Sublime Text looks much better visually.

The first thing you need to install is the Package Control package manager, and then customize the editor for your tasks. I also recommend visiting specialized websites, you will find a lot of configuration material there.

When choosing an IDE, I paid most attention to lightness and user interface. The layout does not require a large amount of functionality, so I did not see the point in installing something complex and gluttonous.

I settled on Sublime Text – this is a lightweight and convenient editor with a large number of plugins that make it easier to work and speed up the process of writing code.

Inconvenient setup process and a huge number of plugins that need to be installed before getting started.

From alternatives I considered VS Code. But in general, you can write on anything as long as it is convenient for you.

In addition to these, there are a huge number of others, ranging from plugins for syntax highlighting Pug, SCSS and ending with plugins for working with Git.

But the choice is always yours, just carve out the goals and objectives of your project and use the advice of our developers wisely when choosing an editor.

Good luck in your endeavors and see you soon!